4 Autumn strategies to reduce weeds in the garden and landscape

With the arrival of autumn many of us ready to put the garden to bed for the season, but before you hang up your gardening gloves, consider putting a little time into weed prevention now as it can not only save you time and effort next spring but even in years to come.

Is there such a thing as the right time to weed? Absolutely! I rarely pull weeds when the weather is hot and dry. Why? Because plant roots cling stubbornly to dry soil making it harder to pull weeds out, instead, the tops of the plants break off but the root remains in the soil only to re-grow. I prefer to weed after a rain. The saturated soil encourages the roots to slip easily from the soil making weeding faster and more effective.

On the other hand, if you’re using a weeding tool like a collinear hoe to cut weeds off at the soil surface, the best time to do that is when the weather is warm and the soil is dry. It ensures the cut weeds, which remain on the soil after hoeing, quickly shrivel up and die. If you hoe when the soil is wet and there are roots still attached to the plants, they may re-establish in your beds.

Bare soil is an invitation to weeds. The most effective strategy to reduce weed growth in landscapes, flower gardens and vegetable beds is to apply a layer of mulch. Mulch is any material that is spread on the soil surface and can be organic like bark or inorganic like rocks. Certain mulches reduce weeds, but also hold soil moisture, regulate soil temperatures, and can add organic matter to the soil as they break down.

Mulch blocks light from the soil, preventing weed seeds from germinating. It’s not magic though and you will have to remove weeds before applying the mulching material, otherwise they’ll eventually pop through.

So, which is the best mulching material to use? That depends on the type of garden. For trees and shrubs, bark mulch is the most common material used. A three to four inch layer is perfect for trees and shrubs but don’t pile it up against the trunk or stems of the plants. This can lead to rot, insect or rodent damage. Leave at least six inches between the trunk of a tree and the layer of mulch.

In the perennial garden, compost or leaf mould makes an excellent mulch. In my vegetable beds, I use straw or shredded leaves to cover the soil and prevent weed growth during the growing season. To reduce autumn weeds and winter soil erosion top vegetable beds with a few inches of mulch once you’ve cleaned up the plant debris. 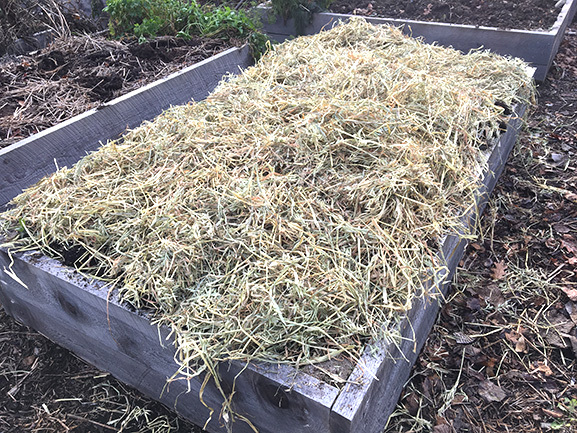 Off with their heads - Remove flowers and seeds

No time to spend pulling or digging weeds this autumn? At the very least clip off any flowers or seedheads of weed plants in your garden beds. This prevents widespread weed seed dispersal which can result in years of pulling weeds. How? Not only do many species of weeds set hundreds or thousands of seeds, but those seeds can live for years in the soil, popping up once conditions are right for them to germinate.

In order to kill weed seeds a compost pile needs to heat up to at least 140 F for several hours. For a well-built compost pile with the right carbon-nitrogen ratio, reaching these temperatures isn’t uncommon, but I know that my casual compost pile doesn’t reach weed seed killing temperatures. Any weeds I pull are put in the municipal green bin and not my own compost pile.